Katahdin and Arborwall dealer Steve Dearlove’s his family spent many summers boating and swimming in Buckeye Lake, located near the family farm in central Ohio. But recently the area suffered a blow to residents and tourism alike when the water level was significantly reduced and boating was prohibited. What happened?

Park authorities lowered the water level because the dam at one end of the lake was leaking. Buckeye Lake State Park is the oldest park in Ohio. Formed as a canal outlet in 1826, the lake has been a family destination for the capital of Columbus and the surrounding area for nearly 200 years. The lake straddles three counties, Perry, Licking and Fairfield, and the town of Buckeye Lake boasts about 2,700 year-round residents. In 2015, the state closed the lake to recreational boating and lowered the lake water level because the earthworks dam was failing. Ohio Governor Kasich announced a plan to rebuild the dam, which is expected to be completed in 2019. 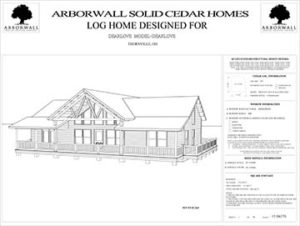 Opportunity Knocked
Tourism dropped with the water levels and the future for the resort community seemed dark. But a solid core of business owners and residents rallied around the promise of a new dam to revitalize the area. As a long-time Buckeye Lake enthusiast, Steve Dearlove seized on the opportunity to make some much needed changes to his family “mini-farm” located just a few miles from the resort area. He already had some experience under his belt in resort home building, with multiple Katahdin Cedar Log Homes constructed in the nearby Hocking Hills, Ohio resort destination. For Buckeye Lake, Steve decided that the Arborwall Solid Cedar Home design would complement the existing cottages on the lake.

With his family’s 12-acre mini farm located nearby, Steve felt the best way to showcase the Arborwall concept was to demolish the older structure and replace it with a custom-designed and -built Arborwall cottage. The 30-year-old modular family home was outdated and needed extensive renovations inside, so the decision to start fresh was an easy one for Steve and his family.

This renewal for Buckeye Lake, while spurred by a calamity, is not an unusual trend for older resort areas.

“Families with smaller, simpler camps and lake houses are replacing them with new, custom-built homes with modern conveniences,” Steve explained. “My parents opted for new construction in 2009 when I built them a new home in the Snug Harbor area on Buckeye Lake.”

Great for Lakes
Arborwall homes, with their solid cedar construction are an excellent choice for a lakeside property. The Northern White Cedar whole logs Arborwall uses for the exterior walls are planed to appear like traditional clapboard. The cedar has natural qualities that make it highly resistant to insect, mold and moisture damage. As a highly sustainable wood, cedar also provides excellent insulation, a real benefit that can transform a single season property to a year-round getaway. Combined with Arbowall’s interior flexibility the only

limits are the homeowner’s imagination!

Steve is in the process of demolition of the old home, with preparations for construction to begin quickly this summer. With other Arborwall home projects planned in the area, Steve hopes that Buckeye Lake and its revitalization will keep him close to home in the years to come! If you’re interested in learning more about the Buckeye Lake project, call Steve at 740-777-2813.