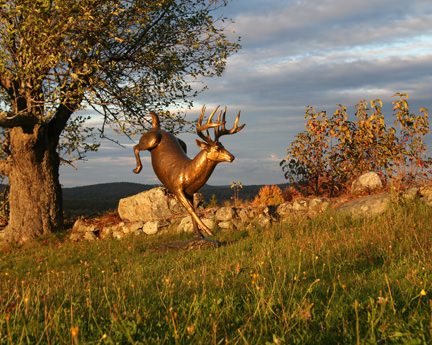 In reviewing the many log home pictorials in magazines and some Katahdin archives, we noticed that quite a few log home owners enjoy hunting and have mounted their hunting trophies in their homes. So it seemed to make sense to write an article on taxidermy. But that story will be told in a future View From Up North, for we found another very interesting story to tell.

In some ways similar to this article, Forest Hart got his start in taxidermy. In Aroostook County, Maine, he grew up with a strong interest in animals. He learned taxidermy in a traditional manner, mounting the trophies of local hunters. Then at the age of 21 he was accepted as a taxidermy apprentice with the Carnegie Museum in Pittsburgh, Pa. There he studied and learned—not only the art of taxidermy but anatomy, behavior, and lives of the creatures he was preserving. He learned how to craft the frames and mannequins over which the skins of bears, deer and other creatures would be stretched.

Hart returned to Maine where he started to practice his taxidermy art. He found that there was a demand for mannequins, which were relatively easy to manufacture out of polyurethane. He ultimately had four people working for him making the animal forms. “But the business got too big and I didn’t like being a businessman,” he said. “I like to make things, and I didn’t have the time anymore.” On his website, he writes, “The hundreds of animals that I modeled to produce mannequins for taxidermy provided me with the best training and education possible.” But he was also interested in developing his own artistic style and modeling in a more impressionistic technique.

He chose bronze as his medium, which allowed for multiple sizes, from paperweights to monuments. The art of creating his bronze wildlife pieces involves a multi-step process, beginning with sculpting the figure in oil-based clay in his studio in Monroe, Maine (above right). Once he is satisfied with his clay model, he makes a rubber mold of the sculpture and ships the mold to the foundry he uses in Colorado.

At the foundry, wax is poured into a mold that makes a hollow ¼-inch thick reproduction of the original sculpture. Hart then removes any imperfections or bubbles in the wax figure. 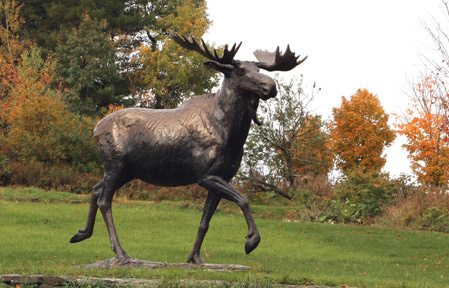 The next step is what is commonly called the “lost wax” process, used in jewelry and other metal fabrication. Hart says it’s a bit of a misnomer since the wax is ultimately collected and recycled.  For this next step, the wax model is cut into manageable pieces, as few as two for small pieces or dozens for large animals. Each wax piece has a handle attached, and then is dipped into a cool ceramic slurry. The ceramic coating then dries and the process is repeated three times a day for three days until the ceramic mold is the proper thickness. Next the molds are placed in a kiln at 1800 degrees Fahrenheit, which melts the wax and leaves the ceramic molds empty. 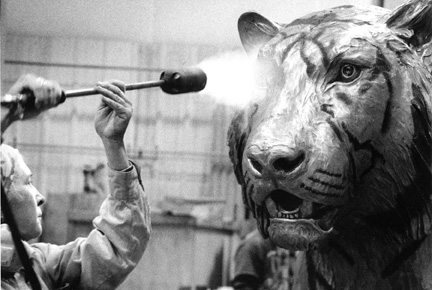 Once it is welded, the seams are carefully ground down to match the surrounding textures, providing an unblemished surface. The bronze is then sandblasted again and Hart applies a mixture of liver and sulphur, which blackens the bronze. It is then rinsed with water, scrubbed with Scotch Brite scrub pads to highlight the high spots and heated with torches to 350 degrees Fahrenheit. With a combination of different chemicals the desired patina is achieved. Once the piece is cooled, it is sealed then waxed to preserve the finish.

Though the process is detailed, the results are magical. Hart’s customers have commissioned oversized and life-sized statues of horses, tigers and moose as well as his own lively deer, foxes, bears and other woodland creatures. One of his most challenging pieces wasn’t an animal but a statue of Daniel Cony, the founder (in 1815) of Cony High School in Augusta, Maine. Because there were no photographs of Cony, Hart had to refer to a portrait of Cony painted by Gilbert Stuart. Hart happened to be the same size and stature of Cony and he was able to assemble a period suit to model so that Cony’s likeness would be as realistic as possible.

Hart’s work can be seen in locations across the U.S. and around the world and on his website, where sculptures can be purchased. Whatever size the sculpture is, Forest Hart’s figures make a lasting impression. 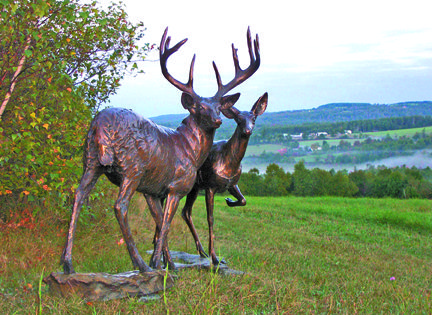 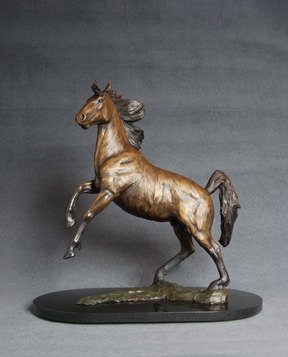