Home|Blog|Uncategorized|Drainage, Radon and Your Foundation 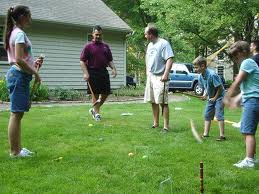 The two top issues associated with basements and foundations are drainage—keeping your basement dry— and radon mitigation—venting harmful radon outside the home. Because they are both linked by sealing of the basement and foundation, it’s important to examine them together.

Radon Mitigation—How It Works
Radon gas is present in many soil types in the United States. It seeps up through the soil and is generally dissipated harmlessly into the atmosphere. However, when a home is built in an area subject to radon gas, the house acts like a holding container allowing radon gas to build up to dangerous and harmful levels inside the home, if the radon is not given a pathway to escape. According to the Environmental Protection Agency, radon is the leading cause of lung cancer among non-smokers.

Radon mitigation systems employ an electric fan that creates a negative pressure underneath the entire foundation slab to, in essence, vacuum up the radon gases and dissipate them into the air outside the home. This is called a sub-slab depressurization system. There are two types of fans used in these systems, a high-pressure fan, used when the subsoil is more dense, and a high volume fan, which pulls more air out over time. To create an effective suction to pull gases away from the home, the basement slab must be sealed completely, including any cleanouts for pipe or other holes where dirt can be seen. If necessary, a sump pump that is radon sealed will maintain the negative pressure in the subslab system.

French Drains
Another issue in basements is moisture. A French drain system installed around the perimeter of the foundation will channel subsurface water away from the foundation and keep it from pushing up through hydrostatic pressure and seeping into the basement. In some older applications, foundations sometimes allowed a small gap between the slab and the foundation wall to allow water to escape into a French drain. However, with the sealed foundation requirements for radon mitigation this small gap cannot be installed if your radon mitigation is going to function. If your building envelope is wet, it may be worth considering relocating the homesite to avoid ongoing water issues.

A French drain collects subsurface water and channels it away from the foundation via gravity or a sump pump. To construct a French drain, a 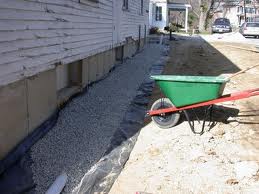 trench is dug around the foundation and leading away to a discharge point. The trench is lined with 6-ft wide filter cloth, which is lapped up the foundation; excess fabric is spread away from the building. The trench is then filled with 3 inches of clean gravel. Four-inch rigid perforated PVC pipe is installed over the gravel with the perforations facing up. Then more gravel is filled in to a level of about 8 inches above the foundation. The filter fabric is then pulled back over the gravel and lapped up the foundation wall. The filter fabric extends the life of the French drain by keeping fine particulates out of the pipe and preventing clogs.

Sealing the Foundation
It’s clear that when employing French drain and radon mitigation systems that sealing the basement foundation will be key in the success of both systems. Concrete is a relatively porous substance, so using a top-notch spray-on sealant with special attention to joints where the wall meets the slab is well worth the time and effort.