Stones have been used to construct walls, bridges and other structures for centuries. When the wall is constructed of interlocking stones without any mortar the technique is called dry stone walling. Britain has used abundant local stone to build fences for livestock and for boundaries. The craft has continued in modern times under the Dry Stone Walling Association of Great Britain, which tests and certifies stone wall craftsmen at several levels. Here in the U.S., the strongest group of dry stone enthusiasts in based in Kentucky as the Dry Stone Conservancy. The Conservancy was developed to maintain the traditional dry stone fences and dry masonry found in the Kentucky region. Dry stone walls are also quite prevalent in New England, where they were constructed from stones removed from agricultural fields.

One master craftsman certified by the Dry Stone Walling Association is Chris Tanguay, principal of Maine Dry Stone in Yarmouth, Maine.  We had the chance to meet with Chris and to take a personal tour of some of the testing projects he has completed near his home base.

Dry stone walling takes a unique combination of skill, artistry, and strength. The stone walls, fences and other work he completes is constructed primarily of native Maine granite, using a combination of rounded and squared stones. He works to be both time efficient as well as building a structure with strength, stability and integrity.

A standard stone fence is built approximately 5 feet (1.5 meters) high.  In England, dairy and sheep farms have used these walls for pens for centuries. When more recent modernizations came to fencing, such as barbed wire, the English still preferred their long lasting dry stone fences.  Stone cattle pens—which are also found in early settlements in New England—are general square-shaped, while sheep pens are circular because of the distinctive way sheep herds congregate and move. These stone walls also have stiles for human passage, and lower, arched pass-throughs for livestock and drainage.

Over the centuries, Chris explained, these structures have developed established structural forms that provide stability and strength. The fences are constructed with two stone faces of interlocking stones, with stone packing placed between the faces.  The stone fences will generally have a slight camber toward the center to further stabilize the structure as the height increases. Chris sets up an A-frame structure with strings to keep the walls within specifications.

“I tend to work in courses, which makes for a smoother building process,” Chris said. He can generally complete a stone fence section 12 feet long and five feet tall in a day and a half. As he builds vertically, at regular intervals a “through stone” will be placed to tie the two faces together.  Traditionally the through stones will extend out from the plane of the wall by several inches. At the top, the large coping stones finish the fence and complete the connection between the two stone faces. 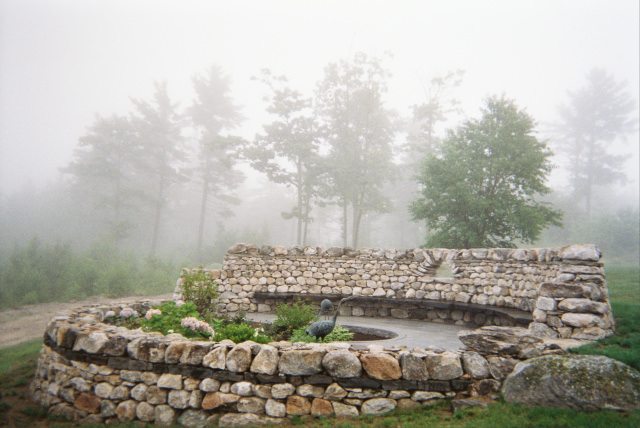 The techniques that are tested provide Chris with solutions and ideas for his landscape stonework in New England. Curves and round forms, archways and pass throughs provide architectural interest to the stone structures Chris builds for homeowners and historical preservation groups. One test site Chris completed was a wall on a steep hillside (above right) near his family farm.  The challenge provided skills to work in different terrains.

To find a dry stone waller in your area, you can contact the Dry Stone Conservancy or the Dry Stone Walling Association of Great Britain. This organization is holding certification Test Days  in Vermont on July 16 and October 17, in Dummerston, VT.  Chris Tanguay has served as an examiner for these tests.