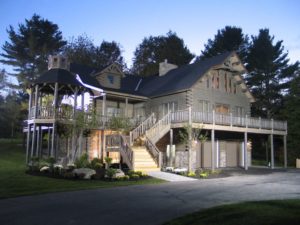 The Extreme Makeover: Home Edition television show marked a significant point in the growth and recognition of Katahdin Cedar Log Homes. When the 2005 episode featuring a custom Katahdin Cedar Log Home built to replace the home of a Wells, Me., lobsterman, owner David Gordon wasn’t quite sure how it would turn out. But, Katahdin was the only log home company willing to take this leap of faith. And the rest is history.

As Gordon often notes in his log home seminar presentations, “We learned an awful lot about our company, our people and the kindness of our neighbors.”

And the project boasts some pretty impressive stats: over 4 ½ days, 1,300 volunteers worked an average of 32 hours each — day and night— to complete the 4,300-sq. ft. log home that included 3 bedrooms, 3½ baths, a basement, two car garage, large patio and gazebo as well as a spacious loft. The total goods and services donated tallied out at $680,000 with total person hours topping 41,600.

Lessons Learned
A small family-owned company doesn’t tackle a project like this without some hiccups, including unexpectedly needing to relocate the septic system. But Gordon returns to how the exciting and demanding project offered up some key lessons that has improved Katahdin’s own business practices.

One of the first, best lessons learned was how kind and generous so many people were. Many companies donated time, goods and services beyond what was expected. “It was so uplifting to see how eager to help and to give our co-workers, vendors and communities were,” Gordon added. “It’s a spirit that is so uniquely American.” 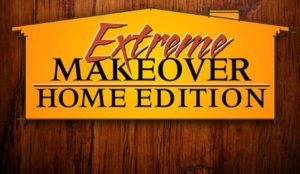 Everyone Works Together
Another huge benefit that Gordon realized from the Extreme Makeover project was getting everyone on the same page. “We needed to work quickly and get a lot accomplished in a very short time,” he explained. “What we discovered was that while there were often several ‘right’ ways to complete a task, often there was a ‘best’ way that saved time and produced a quality result.”

The Katahdin dealers who volunteered their time for the Extreme Makeover home got to work closely and intensely with other dealers they once knew only by name. The result was several close working groups who now rely on one another to solve problems or just hash out ideas. “Our dealers are generally competitive but during this project, they became open to sharing and working together for solutions,” he explained.

For example, one dealer/builder had a simple, effective way to cut and assemble round railings that saved about a third of the time needed to complete the task. “This technique has knocked about 20-25 hours off a typical home,” Gordon said. Another builder had a meticulous approach to keeping corners tight and squared when laying the log walls. This careful shimming technique has translated into an improved final product. Yet another builder/dealer used simple strapping to stabilize window and door openings, which enabled the trim work to fit tightly for better 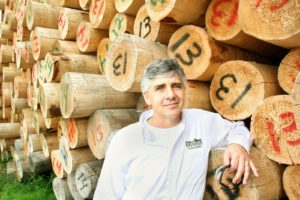 air sealing. These techniques are now included in the Construction Manual.

Permission to Innovate
Another aspect of the Extreme Makeover project was the change to company culture. The intense project gave Katahdin dealers and employees permission to innovate. That innovation has allowed the company to evolve and improve their product as well as employee morale. Gordon notes that the opportunity to see new ideas solve immediate issues at the Extreme Makeover building site has led him to encourage new ideas and solutions to home design and engineering to this day. “It created such pride in our work and it was such an honor to be asked to do it,” Gordon said.

About the same time as the show was being taped, many other innovations were coming to the forefront at the Oakfield mill, including the computerized house manufacturing line and a focus on green manufacturing. “This show elevated Katahdin to a new, national level,” Gordon said, and we’ve never looked back.”