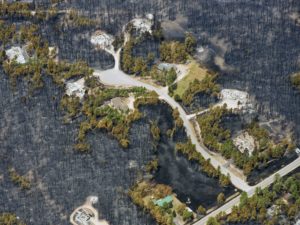 Fire is a danger that many people would rather not think about when designing and building a new home. Yet, many areas are making fire protection and mitigation a code requirement. In some cases, good fire mitigation practices have achieved the goal of protecting homes and keeping the structure intact.

Before we get into some specific fire mitigation steps, we’d like to share a story of one Katahdin Cedar Log Home that was saved from the largest forest fire in the history of Colorado, the 2013 Black Forest Fire (right). In that conflagration, 14,000 acres or about 22 square miles were burned. Over 500 homes were destroyed and two people died.

Three months before the fire, Katahdin dealer Matt Rohrer, based in Palmer Lake, Colo., had completed a beautiful new home for his client. During the planning stages, Rohrer strongly recommended several fire mitigation design changes that were implemented, even though they represented some additional cost to the budget. Those recommendations included clearing trees and brush from a 40-foot defense zone around the structure and installing a steel roof.

When the Black Forest Fire approached the Katahdin home, the fire fighters were able to defend the structure from the fire because of these mitigation steps. The home’s deck was literally chained to trucks and pulled off the house so that it couldn’t transmit the fire into the structure of the home. The steel roof prevented cinders from igniting and the large defensible area around the home provided the space needed for the fire fighters to do their jobs. At the time of the fire the owners were out of the country, and upon their return, they were relieved that their home was still standing. Deck repair and re-staining were minor when compared to the potential complete loss. 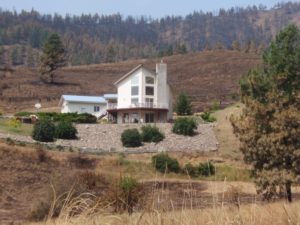 What is Fire Mitigation?
Fire mitigation practices are implemented to minimize the potential damage from a fire from the outside, like a wildfire in the forest. Fire suppression, which will be covered in Part 2 of this series, addresses putting out a fire that starts inside the home. Mitigation attempts to stop the fire from igniting the house structure and minimize damage.

Wilderness Urban Interface and Fire Wise
Because of the increase of forest fires in recent years, state and local governments have developed programs to educate homeowners about protecting their homes from fires. The Wilderness Urban Interface (WUI) is one governmental agency in California that manages ways for home owners who live on the edges of urban areas and forested lands to address fire mitigation. As humans expand outward into wilder areas, the way to keep residents safe from wildfires becomes more complex. WUI has developed excellent guidelines for building in rural areas prone to fire, and in some areas, these recommendations have been codified into building codes. Another excellent source for precautions for fires is the non-profit organization Fire Wise. Their website has excellent information on how to plan for and prevent fire damage where possible.

Several fire experts we spoke with indicated that because of log homes’ mass log wall structure, they were less likely to ignite quickly the same way that traditionally framed homes do. The space between studs on a framed home can act as a chimney and accelerate the conflagration in ways that do not happen with a solid log wall. So, the key is to keep the logs themselves from igniting and limiting the ways that fire can enter the home. 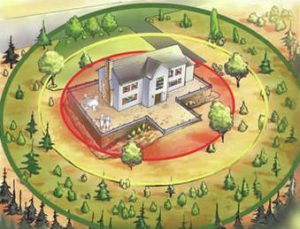 Defensible Perimeter
The first area to address in mitigating fire danger is creating a defensible perimeter.  The defensible perimeter clears out brush, vegetation and trees in an area around the home to minimize the paths for wildfire to reach the home. Defense perimeters also provide an area where fire fighters can defend your home. Recommendations vary as to the distance, some codes require a minimum 10 yards, while other areas expand that distance.The wider the area, the better your home can be protected from sparks and cinders. If your home is located on a hillside, the defensible area should be increased on the slope below the home, depending on the topography. Fires travel quickly on updrafts and so a larger defense area is recommended.

Fire Retardant Treatment
Another approach to preventing ignition is through passive wildfire protection. We spoke with  Dylan Novak and Blake Rutherford at Flame Seal, a manufacturer of fire retardants based in Houston, Tex. The company makes several products

designed to retard the ignition of fire on wood surfaces, by forming an  intumescent char when exposed to fire. As a charred surface, the wood underneath is less able to ignite, with minimal flame propagation and smoke evolution.

One Flame Seal product is Wood Seal A, which unlike other fire treatments, penetrates the wood and dries clear. Once the fire treatment is applied staining and sealing can be completed.  The material can be used on interior and exterior wood surfaces and has achieved the highest possible E84 fire performance rating through third-party laboratory testing.

The treatments all are water-based with low VOCs, though the Wood Seal A has slightly more alcohol based wood penetrant aids and requires stirring before use. Once the fire treatment is applied staining and sealing can be completed. Wood Seal A can be applied with spray, brush rollers or dipping. According to Rutherford, they have applied these products in tandem with stains and sealants with excellent results. One product that pairs well is the Seal-Once™ Poly Seal and Poly Blend Tints. Because there are many stain and sealing products available, he recommends testing the combination of Flame Seal product and your choice of stain product.

Landscape Fire Retardant Treatment
In addition to Wood Seal A, Flame Seal Products has also developed a landscape product for home owners to defend against wild fires. FS-PG™ Perimeter Guard is a proprietary powder designed for dilution in water and applied as a passive fire retardant directly to the natural areas surrounding the perimeter of homes and other landscaped areas. The product is applied to dry grasses, brush, wood and other cellulose type material, with minimal effect on the environment. The product has been developed to protect the ignition zone outside of the perimeters of structures or landscaped areas during wildfire events. 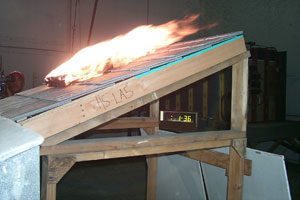 As we noted earlier, Matt Rohrer recommended a steel roof for his customers, a recommendation he feels played an essential role in how the home survived the Black Forest Fire. Class A roofs are those rated as most resistant to fire ignition by the National Fire Protection Agency and building codes. Class A roofing materials include steel, concrete and many other options. The choice of a Class A roof in some wildfire-prone areas may be a code requirement. Either way, the investment makes a great deal of sense for homes on the edge of forested areas. Many times, the point of ignition comes not from immediate flames, but from cinders and sparks carried from many miles away by high winds and landing on roof structures.

We also spoke with Bill Hendricks of Safe Building Solutions, who indicated that oftentimes it’s the trim, decks and fascia of log homes that ignite most easily in a log structure. He recommends that any fire retardant treatment that is used should be tested and approved with an E84 fire test conducted by a third-party testing laboratory. 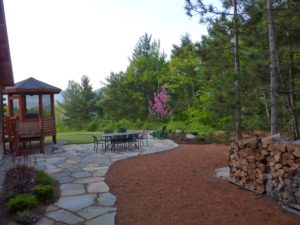 Outdoor Decks and Living Areas
Many log home owners love and enjoy outdoor spaces like decks, gazebos or broad porches. In fire-prone zones, it may be wise to reimagine how your outdoor spaces are realized. One of the first actions taken by fire crews in the Black Forest Fire was to hook tow chains up to decks and pull them away from homes in the path of the flames. Fire fighters found after considerable experience that decks provide the easiest conduit into the structure itself. The deck’s stringers would conduct the fire up into the inside of the wall, where the home would quickly become engulfed. One remedy would be to treat the decks with fire retardant such as the Flame Seal product above. Another option would be to reimagine outdoor spaces with hardscaped terraces and patios, using stone, brick or tiles. Reducing the available fuel for fires is a good solution for homes at the edge of forested areas. 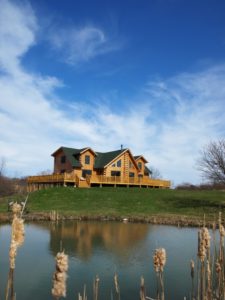 Water Sources Can Help Fire Fighters
Rural areas most often mean private water sources — usually a well for domestic water in the home. There’s a very common-sense reason that farmers in rural locations often included a substantial farm pond in the area close to structures: to provide water for fighting a fire. Since many log homes are equally remote relative to water sources, it makes sense to consider constructing a pond for the firetrucks to draw water from. In some areas, a private or communal cistern can be constructed to provide essential water for fire trucks.

While no method of mitigation or passive treatments guarantees survival from a wildfire, these steps when combined can provide enough protection to keep your structure intact and give firefighters a good chance to save your home. Next month, we look at fire suppression, including residential sprinkler systems, new code requirements and how sprinkler systems can be engineered to function in log homes.