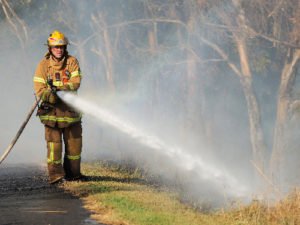 What if there was a safer, cleaner and more effective way to put out a fire? One company, North Carolina-based Fire Suppression Innovations, has upended the industry with their new formulation GreenFire®, that takes fire suppression to a whole new level. Nobody likes to talk about fire suppression more than CEO Ben Allen. He spent 17 years in the fire industry and began playing around with the idea that there might be a different approach for extinguishing fires that could be safe and effective. What he’s developed in GreenFire® is an answer to fire suppression that’s rated for all residential applications, food safe and certified organic.

GreenFire® is in the right place at the right time for developing a new fire suppressant. Human and environmental dangers in the formulations used for putting out fires led to the chemical ingredients being phased out or outright banned because of the long-term harm they cause. The chemicals used in traditional firefighting and extinguishers contain PFAs and ammonium phosphate among others, which are harmful to humans. These chemicals need special equipment to clean up after application. The biggest worry is that the chemicals often escape to contaminate groundwater. According to Allen, the GreenFire® innovative product formulation is certified as safe for people or property and can be wiped off with soap and water. Its NSF certification allows it to be used in food settings and their organic certification is just days away from being approved.

Preventative Fire Suppression
Water alone is not a very effective fire extinguisher—it only puts out wood-based fires and often causes more damage to areas surrounding the fire location. Allen has been working directly with major home insurance companies, including Hanover, State Farm and AIG. These companies are searching for ways to reduce their damage and liability for water damage associated with putting out fires. That’s one of the drawbacks to water sprinkler systems, Allen said. “Sprinklers activate, then flood the area with water, damaging interiors, furnishings and structures— often causing more damage than the initial fire,” he noted. His product can be mixed with water and pumped through 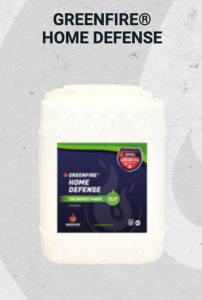 existing sprinkler systems to put out fires and keep embers cool to prevent reignition. Cleanup is simpler as less liquid volume is needed to put out the fire.

Smart Sprinklers
When combined with smart controls, Allen envisions being able to activate targeted zoned sprinkler fire suppression, keeping collateral damage to a minimum. For sprinkler set-ups, GreenFire® is housed in holding or reservoir tanks and connected to the system. GreenFire® is effective and safe using less than half the volume of water— eliminating the need for oversized water holding tanks or ponds. This reduced volume is another advantage for areas where water shortages are an issue.

Safeguarding Remote Locations
Often Katahdin Cedar Log Homes are situated away from town centers, with limited fire response. By equipping a rural home with an auxiliary pumping tank filled with GreenFire® Home Defense product, homeowners can pretreat the exterior of the home and surrounding vegetation in advance of a high alert brush fire season. The suppressant sprays harmlessly onto surfaces to prevent ignition from stray sparks and maintain a fire perimeter around dwellings. In some areas, companies can apply GreenFire® on a regular basis, similar to lawn care services.

If codes in your building site location require fire suppression to be included in the design of your Katahdin Cedar Log Home, it might be a good idea to check with GreenFire to see how their new, safer and more effective products can be integrated into your plans. Check out the company’s video of GreenFire extinguishing a crib fire here.