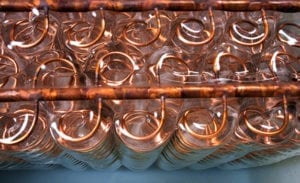 What if you could cut your AC bill by as much as 40 percent without losing comfort?  Ice Bear batteries use a unique approach with ice to save energy dollars. Reducing AC costs can mean significant savings in homes with central air —they often spend as much as half of their electric bill on cooling. The challenge becomes more extreme where time-of-use rates are imposed by power companies.

We spoke with Mike Hopkins, CEO of Ice Energy about the residential version of their Ice Bear battery system. The Ice Bear works like a normal AC compressor but adds a water tank and heat exchanger. The Ice Bear battery uses a patented thermal storage system to create a reservoir of ice that collects in the water tank. When electricity use and rates spike in the late afternoon hours, the Ice Bear compressor turns off and the fan distributes air cooled by the ice formed in the reservoir. The ice reservoir provides about 4 hours of cooling— enough to keep you cool while using only the electricity needed to run the fan and refrigerant pump—a small fraction of normal AC operation. 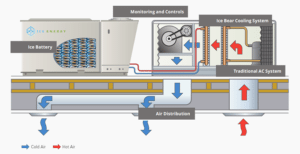 Ironically, areas with the highest use of solar PV panels are paying the highest time-of-use rates, according to Hopkins. Time-of-use rates automatically increase during times of high electricity demand. In states where solar is in high use, the normal “bell curve” use graphs for utilities changes into a “duck curve.” The duck curve shows a smaller, flatter midday usage because solar is producing at its peak (the duck’s back). Later in the day, when solar production falls off and when commuters arrive home, AC and other electrical appliances surge into use spiking the curve into its distinctive duck head shape.

Cut Expensive Electricity Use
Utilities have responded to the “duck curve” usage by applying high time-of-use (TOU) rates during the early evening. In California, those TOUs are three times the standard rate. In Colorado, TOUs can be as high as 4 times the standard. The highest occurs now in solar heavy Hawaii with TOUs five times the normal power rate. Ice Bear provides cooling during these high-priced time-of-use periods, to limit your home’s power draws to smaller appliances and electronics. Depending on your utility’s time-of-use program, Ice Bear can cut electricity bills dramatically during AC season.

How Does Ice Bear Work in Residential Applications?
Ice Bear can cool your home two ways: connected to a traditional duct forced air system, or connected to a ductless mini-split air handler. Either way, this thermal storage technology can take a huge bite out of your home’s cooling energy bill.