Building on the successful addition of our biomass boiler in early 2006, Katahdin president David Gordon decided to look for other ways to convert local waste products into alternative fuel. The company uses the biomass boiler to recycle sawdust waste from the mill, which was previously trucked away, to heat the company’s mill buildings. 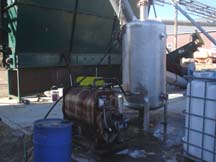 In the Aroostook County area around Oakfield, Maine, potatoes are the primary crop. Farmers were routinely having to truck below-grade potatoes to disposal sites, at a considerable cost, similar to the problems Gordon was having with trucking his waste sawdust away.

The new opportunity came with the purchase of a commercial ethanol distiller, which ferments culled potatoes from nearby farms into ethanol. Katahdin anticipates to be able to produce about 100 gallons of ethanol a day. The alternative ethanol fuel will be used as a supplement to gasoline in mill vehicles. The new distiller produces ethanol at a cost of under $1 per gallon, a bargain compared to gasoline prices of well over the $3 mark.

Turning Waste into Fuel
The ethanol distiller is another piece added to Katahdin’s mosaic of alternative fuel options. When we launched our 14 million BTU biomass boiler to recycle the mill’s wood waste into steam heat for the mill buildings, we reduced our fuel oil consumption by 90 percent.

Potatoes seemed like an obvious choice to ferment into high quality ethanol. Like any crop farming operation, potato farmers have a certain amount of crop waste that doesn’t meet their quality standards or USDA grades. Any time you can turn a read

Dick York, owner of Nature Circle Farm in Ludlow, Maine, and other local potato farmers, will be providing the culled or below grade potatoes. Potato farmers generally have to pay to dispose of culled potatoes, so this new option made sense for York. After processing, the remaining waste potato mash is collected by nearby livestock farms to supplement their herds’ feed.

Distilling Ethanol for Vehicles
The potatoes are dumped into a large vat of the distiller where they ferment for 72 hours. The resulting liquid is processed in the distiller twice, where the ethanol is produced through evaporation and condensation.  The resulting liquid is tested with a hydrometer to determine whether it has reached the 90 percent ethanol level, which makes it pote

According to manufacturers’ specifications, most late model vehicles can burn a 15 percent concentration of ethanol additive to gasoline with no modifications.  We hope to experiment and reach a 50-50 balance of gas to ethanol, and cut Katahdin’s vehicle fuel costs in half. Future vehicles purchased for the company will be flex-fuel cars and trucks, which can use 85 percent ethanol. In his research on ethanol powered engines, Gordon learned that race cars use ethanol because the small percentage of water actually provides an added boost when the water changes to steam during combustion.

The distiller is being operated under the license of the previous operator until Katahdin’s state license is approved.  Though it is presently wood-fired, Gordon plans to connect the distiller to the biomass boiler and run the fermenter with steam heat. Though the process of running the distiller is labor-intensive at present, ultimately we hope to have the distiller fully automated. As we continue with our alternative energy projects, we’ve discovered uses beyond what we had originally envisioned. And, we’ll continue to keep our eyes open for other sources!