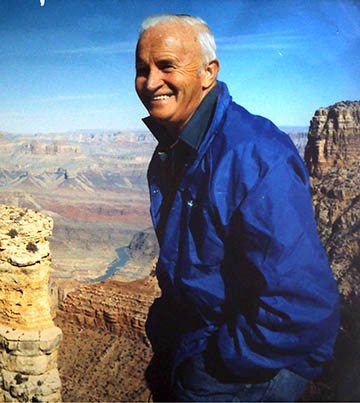 A little over four decades ago, three men embarked on a partnership to pool their skills and start to build log homes. Forty years later the mill that produced a single log home a year has grown and evolved into to one that could manufacture twice that number of homes in a single day—Katahdin Cedar Log Homes.  The story of how that happened is a study in perseverance, hard work and innovation set in the backdrop of Aroostook County in northern Maine. 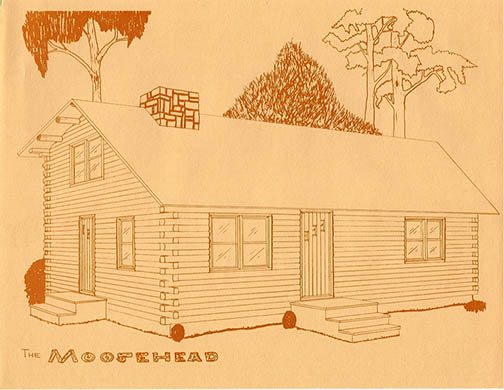 Katahdin Cedar Log Homes started with three men, Foster “Curly” Gordon (right), Fred McCormick and Wayne Farrar. Gordon was managing several large sawmills, McCormick was running a small cedar mill in Houlton and Farrar was a logger. These friends decided to pool their talents and start their own cedar sawmill to produce fencing and log homes. The first four years, the fledgling company produced a log home each year. The homes were hand-peeled, shaped by hand using a two-handled draw shave, and notched and cut to fit the house plan. The economy began to tumble in 1973 with the first oil shock, followed by elevated inflation and double-digit interest rates. The trio persevered with their log home dream and kept producing cedar fencing to survive.

In 1977, Foster Gordon and his partners built five homes and began to build its dealer network with five experienced log home dealers. The homes built in those early days were modest in size: 1400-1500 square feet (see above left). That relative boom year was also the date that David Gordon, Foster’s son, began working at the mill full-time. He had started working summers in 1975. In those early years, David piled logs, used a draw shave on logs and spruce purlins. He continued up the ladder and began operating a fork lift as well. 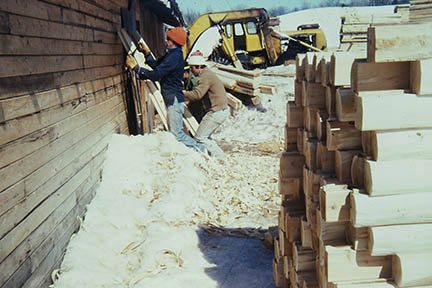 1980 marked the arrival of more dealers and the company was shipping a home every 2-3 weeks. That year, David Gordon and his wife, Glady, built their log home, which is a highlight of the Katahdin Mill tour that David conducts for visitors to the Oakfield headquarters. 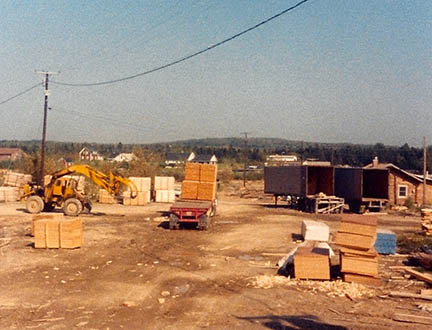 Wayne Farrar departed the company in 1980, but Foster and Fred McCormick continued the operations. Fred worked as a millwright and mechanic until 2000, and was known to be able to fix most any piece of equipment.

The 80s were witness to steady growth into “a very nice business,” said David Gordon. Everything for the log homes continued to be peeled and shaved by hand with a draw knife by about 20 employees. “It took about two and a half days to run the log stock of one home. The crew used the remainder of the work week to peel and finish the purlins for that log home,” he said. The picket and saw mills were running full time as well during this time frame. By 1988, “We were pretty much maxed out,” Gordon said, “and that summer we shipped 2-3 homes a week.” 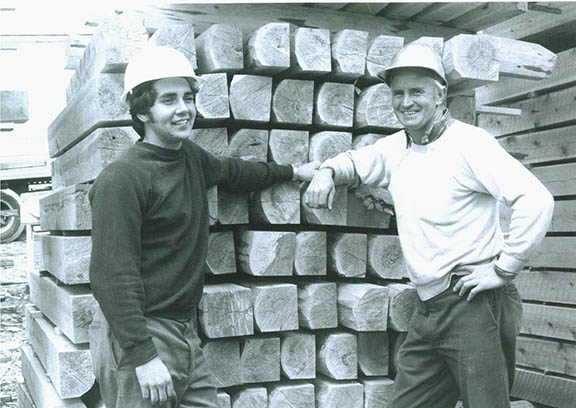 In 1989, a customer, Ken Boudin of Wiscasset, Maine, offered to trade a state-of-the-art industrial planer for his Katahdin Cedar Log Home. That planer— which is still used in production today— enabled logstock production to increase exponentially. The planer allowed Katahdin to prepare log stock with tongue and groove for 8-9 homes a day. “This gave us more options and more quality to our homes,” said Gordon.

Around this time Katahdin started to look at ways to decrease waste and utilize more of the cedar logs that were coming into mill production. In 1991 the post and rail mill was constructed to peel the tops of trees down to a two-inch diameter to incorporate into post and rails for stairs and decks. The post and rail mill employed a half dozen more employees. That year marked as many as 75 employees working full-time at the various mill operations. It also marked the inception of Cedar Ideas, another green way to utilize more and more of the cedar trees. Long time employee and present general manager Kevin Locke (1981) and his dog were the first Cedar Ideas employees. That portion of the company grew to 35 employees within three years.

Fires, New Construction and Rapid Growth
A potentially devastating challenge is the danger of fire in any lumber mill. Katahdin has been struck by fire several times over the forty years, but in many cases, what the fire destroyed was rebuilt and expanded to be an improvement over the lost facility. For example, when the original sawmill burned down in 1979, it was replaced by a temporary mill that now processes six-foot logs. Fires continue to be constant concern, and the company has taken measures, including training for personnel in fire safety and containment. Katahdin also keeps two fire trucks on hand for fire prevention purposes. 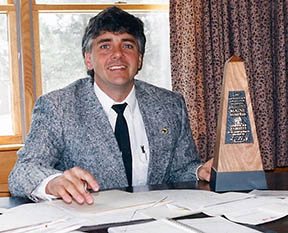 It was also during this timeframe that David Gordon started to shoulder more responsibility in the company, with nearly complete direction of the manufacturing by 1995. Foster Gordon began wintering in Florida in 1990 and succumbed to cardiovascular disease in 1997. A year later, Barry Ivey jumpstarted an aggressive program to expand Katahdin’s dealer network, and increase the company’s presence in the industry through exhibiting at national log home shows. In just a few years, the dealer network grew from about 20 to the current level of 75 dealers. Log home shows became a mainstay for marketing the company and developing the essential one-on-one contact with customers.

With the influx of the new generation and expanding revenues, the early 2000s marked a turn toward more automation and computer-based efficiencies. The house manufacturing line (right), which was developed and put online in 2005, took the log home design process into the digital age. The house line’s ability to transform computer assisted designs (CAD) of log homes into 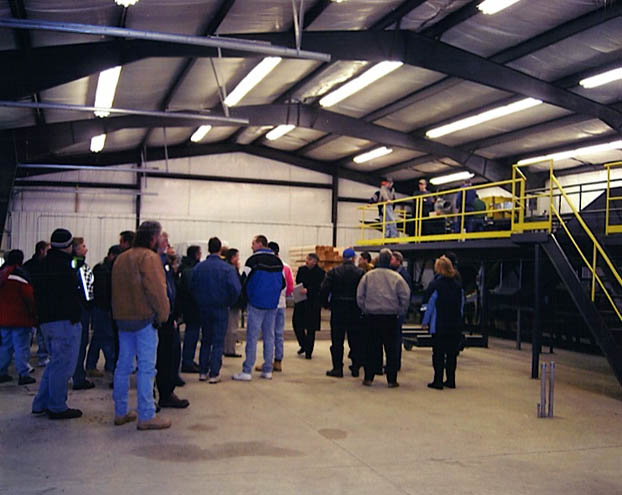 complete shaped, cut and bar-coded logs efficiently and accurately shifted Katahdin’s production ability from a handful of homes in a week to two homes in a single day. A year later another cost-efficiency was instituted when Gordon installed an industrial biomass boiler. The boiler provides steam heat for the mills and drying logs by burning the sawdust and small scraps that were being trucked to a landfill. The boiler, too, was computer operated and allowed the mills to eliminate 90 percent of fuel oil consumption.

Like many enterprises, Katahdin also benefited from a certain amount of good fortune. In 2006, David was approached by producers of ABC’s Extreme Makeover: Home Edition. The producers challenged him to design and build a brand new Katahdin Cedar Log Home for a Wells family who had come upon hard times. They accepted the invitation, and over the following months, every employee and department contributed to making the program a success. The program cemented Katahdin’s national and international presence in a single two-hour timeframe.

Coming next month: Part 2: The Secret to Success—We get a first-hand glimpse of Katahdin through the eyes of eight long-term employees.