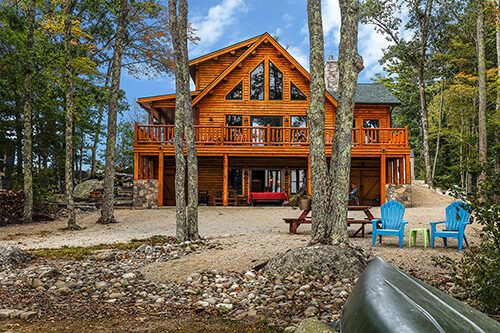 Alan and Barbara Wilson’s goal was to build a lakeside retreat on Alan’s family land on Patten Pond near Ellsworth, Me. This three-season log home would bring together future generations in a beautiful setting full of childhood memories. They ultimately achieved that goal and now spend summers in their modified Kodiak Katahdin Cedar Log Home. But it took some flexibility, ingenuity and perseverance to get there.

The Wilsons were diligent in their research: they attended log home shows and participated in the 2017 Sunday River Logapalooza weekend. The events were so useful, Barbara noted, “Log home shows helped us tremendously to get ideas on how to make our log home our own.” The couple visited Oakfield, Me., and received a comprehensive mill tour from David Gordon, owner of the company. They paid a deposit on a Katahdin Cedar Log Home kit but had yet to finalize the details.

Then came Hurricane Harvey. Their Houston, Texas, home was flooded. As they set about repairing their damaged Houston home, they called Katahdin, and put their 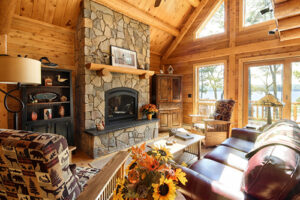 plans on hold. Even though the Texas home was only 18 years old, 20 inches of water required a complete rehab. “We did a lot of the work ourselves,” Alan said, as it was difficult to find contractors. The rehab work had a side benefit: the couple began to reassess their space needs and learn more about home products. “We were educated on what was available in terms of countertops, flooring and other interior elements,” Barbara said.

Around this time, another fortunate turn came. Katahdin had a home that had been manufactured but the buyer had to cancel the order. This cancellation was a very unusual occurrence, happening perhaps once every 5 years. Knowing that the Wilsons were still in a bit of limbo, their dealer John Mannette called to offer this package at a discount. The Wilsons leapt at the chance! 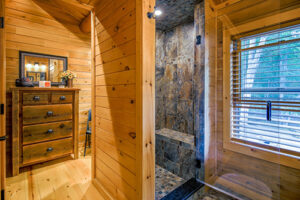 Some folks might have hesitated to opt for someone else’s design, but the couple recognized it for the opportunity that it presented. As it turned out, flexibility was one of the hallmarks of the Wilson’s lake cottage. “We had a different mindset about some of the layout on the second floor and Katahdin’s flexibility was very helpful,” Barbara explained. We talked through a rough drawing with John and the response from the Katahdin design team was, ‘Yeah! Let’s do this!’”

The resulting design featured an expanded master suite, larger kitchen, with the second-floor loft extended out over the dining area. On one side of the home, the wrap-around deck was reimagined as a three-season sunporch with a fireplace. Below, the walkout basement provides a separate kids zone where sandy feet aren’t a big deal on concrete floors finished with heavy-traffic garage shield paint. 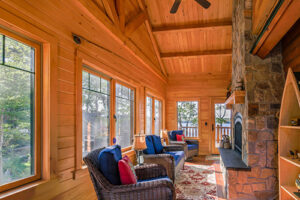 Alan and Barbara were clear-eyed and innovative when it came to the unforeseen challenges that sometimes pop up on building sites. During construction, some heavy rains unexpectedly flowed around the house and washed away the concrete footings where the porch supports were positioned. For extra stability, they added a poured concrete basement wall under the perimeter of the deck. This addition created very long and narrow storage areas on either side of the basement living area to hold all the watercraft, beach toys and other items. “This was a great addition to the property, as the small size of the lot limited any outbuildings or garage spaces,” Barbara said.

The building process also reminded the Wilsons of some of the advice they received at Logapalooza. Katahdin owner David Gordon always makes a point in the budgeting portion of the presentation to recommend a figure that is at least three times the package price for completion. While many people assume log home construction is more costly, the past year has shown that the cost of traditional construction can often be higher than log construction. 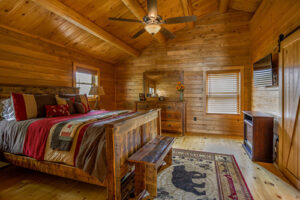 Alan had helped a cousin construct a traditional log home years ago and all he remembers is “lots of drilling.” Katahdin’s predrilled and cut logs eliminated that labor-intensive activity. Plus, the Energy Envelope System made the electrical installation incredibly easy.

Having a lighting plan in place early on was also important, Barbara said. “We needed to be actively involved in the lighting plan because of the nature of log home construction,” she added. Log homes typically need special attention to enhanced lighting to avoid a too-dark interior. The Wilsons met with their lighting design professional early on to ensure seamless lighting installation during interior finishing. 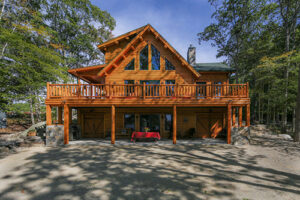 Finally, Alan recalled David Gordon’s advice at Logapalooza: “Know your builder!” Alan said that it’s so important to feel comfortable with your builder and to stay actively involved during construction so that issues can be addressed promptly and efficiently. This involvement can save time and labor costs. The Wilson’s builder, Sinclair Construction, was flexible and innovative during the entire process— from reimagining the second-floor layout to solving surprises during construction.

Throughout construction, the couple felt like Katahdin was there for them. “We felt welcomed from start to finish. Katahdin was willing to help at any time,” Barbara said.