The hybrid vehicle has become commonplace, though most of us can still recall the first Toyota Prius we saw. Now with the advent of the first two production electric vehicles (EVs) reaching the U.S. market an adjustment in the way we look at fueling transportation

is bound to follow. According to Bloomberg.com, depending on retail gas prices, EVs could comprise as much as 22% of the US market by 2030. If you’re an “early adopter” of new technology like an electric-only car, you’ll need to make some accommodations in your home design for a charging station. Three manufacturers have developed broadly available electric vehicles, the Nissan Leaf (above right) and the Tesla Roadster are both electric-only. The third vehicle is Chevy’s Volt (left), which uses electricity as its primary fuel combined with an 80 hp 1.4-liter generator/engine that runs on premium fuel.

Though it is possible to charge your Leaf from a 110 volt plug, the recharging time will be quite a while, 16-20 hours. The Volt has a much smaller 16-kilowatt hour battery pack allowing for an 8-hour charge from a common electrical outlet. But if you plan on operating your new electric car on battery power alone, you’ll need to install a dedicated 220-volt charger in your garage. While most of the world runs on 220 volt, in the US this electrical service is employed primarily for household clothes dryers. 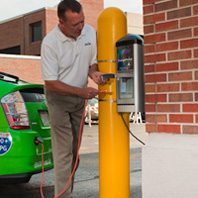 We should note that Tesla owners may opt for a $1500 conversion kit that allows the $109,000 Roadster to be plugged into the owner’s dryer outlet. (Though the thought of a Tesla Roadster owner stepping over the cord in their laundry room—if they even do laundry— is a strange one indeed.)

For the rest of us, adding a home charging port while constructing a new home is a simple enough upgrade. First, you’ll need to ensure that your electrical service is 200 amps. Coordinate with your electrical contractor and municipality to ensure that your charger station is installed to meet code requirements. Colomb Technologies is the primary manufacturer of charging stations and is pioneering the adoption of charging ports in several markets in the US including Madison, Wisc., (left). To find a ChargePoint charging station, click here . The website can also help to identify early test locations for municipal charging networks that would offer public charging stations within certain areas.

Electrical charger ports for residential use are fairly easy to install and come with a number of features to maximize utility. Colomb Technologies offers a wall-mounted unit that can email or send a text message to alert the owner when charging is complete, or to alert of a power interruption.  The unit features smart-grid interfaces to take advantage of low-demand time frames and controls access to avoid power theft and enhance safety. Though the charger port has an extended cable for easy plug access, homeowners should orient the charger port to be in close proximity to the vehicle’s charge port when parked in the garage.

The costs of using electricity can be a substantial savings over gas consumption depending on the kilowatt per hour cost of electricity on your area. Additionally, federal tax benefits on the purchase price, as well as promotional lease options, can make the operation of an electric vehicle an economical option in the near term.