It’s been about a year since we first started talking about the new energy efficiency codes IECC 2009 and much longer since we first introduced our Energy Envelope System®, which meets or exceeds these new code mandates. Here is a link to that information on our website. Even if you were researching Katahdin Cedar Log Homes and other manufacturers at that time, we thought it would be helpful to give you an current update on the process of state adoption of IECC 2009 code requirements. 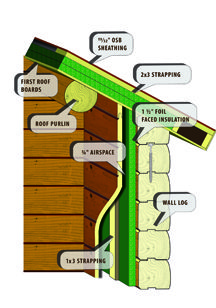 Energy Audit Results
Before we talk about what might be happening at the individual state level with the new codes, we have the results of an energy audit of a recently completed Katahdin Cedar Log Home built with a R-16 insulation package. The report compared that insulated log home to a plain log wall home of the same design. (Note: the home was designed and completed before the final engineered design of the R-23 Energy Envelope System, pictured left, had been developed.)

Built by a Katahdin employee and his family, the home is located in Aroostook County, Maine, which has one of the most stringent energy codes in the continental U.S. The audit was conducted by a third-party energy auditor, WydeVue LLC and consisted of both a prescriptive (based on plans) and performance (conducted on the actual home) analysis. The results were impressive.

The auditor found that the R-16 log home with added wall insulation met the requirements of IECC 2009 by using either method of analysis. The plain log wall (R-9) home would meet energy efficiency codes only by performance, using a blower door analysis, but not by the prescriptive or plans analysis.

Overall, the R-16 insulated log wall home resulted in an 18.7% savings in heating costs when compared to the R-9 plain log wall home. And, the added wall insulation reduced the carbon footprint of the home by more than 12%. When rated using the Home Energy Rating System (HERS) from the Department of Energy, the R-16 home scored a low 57 score on a 1-100 scale, which earned the highest HERS rating of five stars. Additionally, air infiltration rates in the insulated log home were 20%-30% lower than a plain log wall home.

The real bottom line comes into play when the analysis reviewed the cost savings of the R-16 insulated home with a plain log wall home: $348 less for fuel oil over the 2009-10 heating season. To put it into terms that most mortgage holders can understand: over 30 years, the home would save more than $10,000 (if oil remains at the $2.74 per gallon price of the 2009 heating season, which we believe is highly unlikely).

With these positive results for a log home built with a lower R-value than prescribed for current energy codes, it’s easy to see how much difference the Energy Envelope System® can make. Ultimately, Katahdin believes that meeting the IECC 2009 codes provides a superior, energy efficient log home to our customers.

IECC 2009 Compliance Update
Nationwide, all states that received funding from the American Recovery and Reinvestment Act of 2009 are required to update and enact new statewide building codes for residential buildings and renovations. Many states had virtually no statewide codes, while others had limited or outdated requirements for efficiency. As a result, the adoption of the IECC 2009 into individual states’ regulations has taken some time, though all states must enact and enforce new codes by 2012. Some states, like North Carolina, had strong energy efficiency codes in place and only needed to update or revise their regulations. Other states had few statewide code regulations but relied instead on counties and local municipalities to determine the code requirements. For more information about your state’s progress toward IECC 2009 compliance, visit the U.S. Department of Energy website for updated information.

How is Compliance Measured?
Energy efficiency compliance can be measured before construction by using prescriptive measurements, like the computer program RES-Check, which is produced by the Department of Energy. One change in previous energy efficiency codes had a significant consequence for some log home companies. Previous energy efficiency codes allowed for a “trade-off” where a lower R-value for the outer building envelope (exterior walls, ceilings/roofs, floors) could be counterbalanced by increasing the energy efficiency of furnaces or air condition units. IECC 2009 requires that the envelope of the home stand alone and be rated on its own merits. Fortunately, Katahdin has overcome that challenge with its Energy Envelope System®, which meets or exceeds IECC 2009 in all climate zones.