As we learned in last month’s The View From Up North there are three elements to the passive house formula that reduces the heat load by 90% and overall energy consumption by 82%. Windows and doors play an essential role in two of those elements (click here to read the article) by providing a airtight continuous sealed exterior envelope with high insulation values as well as providing the passive solar heating element to keep the home warm.

Windows in passive homes—just like traditional homes— provide natural light, a view to the outside and a feeling of open space. In the GO•Logic passive house we visited in Belfast, Maine, the windows (and the doors) were imported from Germany, where the initial Passive Haus movement started, and where manufacturers have embraced the passive house standards. Windows and doors were imported directly from the manufacturer when the Belfast house was constructed. However, there are some stateside options, and some lumber and windows retailers that are starting to offer German-made windows directly to home buyers.

One US manufacturer of windows that meet passive house standards is Serious Windows. We spoke to Kris Brill, owner of Pinnacle Window Systems in Hallowell, Maine, who sells Serious Windows. “Passive homes can be achieved in many different ways,” Brill said. “Windows need to be specified by the glazing performance, as well as the solar orientation.”

The windows on the southern face of the home should have higher heat gain surfaces to access the benefits of passive solar. On north facing walls, a lower heat gain with higher insulation is more appropriate. 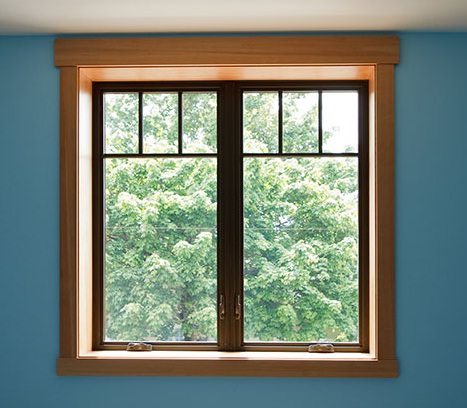 While traditional homes rely on a single rating of the windows, passive house ratings are more detailed. Passive house standards measure the center of the glass, the frame, the head and sill, and connective bucks around the window frame. The size of the window dictates the so-called frame to glass performance, resulting in a somewhat counterintuitive result: the larger the area of glass, the better the passive performance. Windows used in passive house applications are highly insulated in the frames, and are designed for an airtight seal when closed, thus preserving the airtight envelope.

Serious Glass has been used in a number of passive house applications, including several log homes, according to Brill. They offer traditional double-hung options as well as casement-style windows and fixed pane windows.  The added insulation and high efficiency glass also carry a premium price tag, however Brill says for many the tradeoff of doubling the thermal performance more than compensates for the 20 to 30 percent premium in initial cost.

The German manufacturer of windows and doors, Unilux, offers similar high-quality insulation and airtight seals. The company is making some inroads into the US market and so it may be worthwhile to shop for the best price. The Unilux windows offer some unique design options, which are common in European window design. The casement windows feature “tilt and turn” for opening: hinging along the vertical side to open like a door, or tilting open about 3 inches at the top of the frame for some child-proof ventilation.

One US distributor for Unilux is Hancock Lumber, based in Maine. Tom Cyr, Hancock’s vice president of window sales says that Unilux have developed a quality window built for superior performance to meet German passive house standards. The highly insulated sashes on Unilux windows are nearly double the thickness of a standard architectural window. Unilux doors are comparably constructed, providing an airtight seal to maintain the outer envelope. Their Isosta doors are constructed of 6-channel PVC with a selection of applied “skins” offering dozens of colors and finishes, including many remarkably realistic wood finishes. Another aluminum clad product is available in more than 200 color and style combinations.

Like any component in your log home, an investment in quality up front can reap rewards over the life to the home. A window or door that meets passive house specifications are by definition more highly engineered and more expensive, but offer the opportunity to control future energy costs dramatically.