More attention is being paid to radon and reducing levels of radon in homes. A radon inspection is now a routine part of a home inspection when selling. In many areas of the country, radon mitigation or the reduction of radon inside homes is a standard practice.

Radon is an odorless, colorless gas that is found in the soil as a naturally occurring product of uranium decay.

Radon is the second largest cause of lung cancer in the United States, killing more than 20,000 people each year. While it is a deadly substance, there are surprisingly simple ways to protect your home’s occupants from radon gas. Radon is measured in picocuries per liter of air (pCi/L), with the optimal level inside a structure of less than 4 pCi/L as measured by a radon detector. Levels can range wildly, and some homes have registered as high as 2,000 pCi/L. Radon is a heavy gas, and is often concentrated in the lower levels of a home, including the basement, crawlspace or slab.

The US is divided into three classifications, or zones, based on the concentration of radon in the soil. The map is 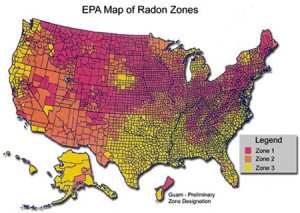 divided by counties, and Zone 1 contains the highest concentrations of radon of more than 4pCi/L. Most of Maine, and the eastern half of the country, is identified as Zone 1. The lowest averages of radon are found in southern states, much of Texas and the Northwest coast. However, this does not mean that there are no radon emissions in these areas. Many times, houses within close proximity will test for widely different levels of radon.

The natural negative pressure flow of air within a home tends to act as a suction to draw radon gas from the soil below. The gas may rise through cracks in the foundation, sump pump wells and other unsealed entry points. The negative air pressure within a home will also generally draw air upward as it warms, distributing the radon throughout the home if not addressed. This heated air upward trend is called ‘stacking,’ and can occur especially between levels in stairwells in particular. Of course home designers try to minimize stacking, to provide more even temperature throughout the home, but even with these designs some rising air and stacking will occur.

How is Radon Mitigated?

To ensure that radon levels in a home are low and safer, construction engineers use a combination of negative air pressure and stacking to move the radon gas from below the foundation to outside, where it is dissipated naturally. This is accomplished with a simple PVC plumbing grade 4-inch pipe, sealing and if necessary an exhaust fan. 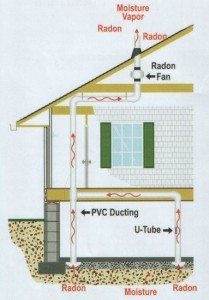 While retrofitting radon mitigation is generally a simple task, it is most easily and inexpensively accomplished during the construction of the home. Retrofitting for radon mitigation can range in price from $300 to $2000, depending on the location and market. Incorporating a radon system in a newly constructed home can add as little as $300-$500 in materials, many of which would already be employed for energy efficiency and codes.

For purposes here, we’ll review the ways a radon mitigation system is constructed in a new home. According to the EPA website, radon is kept from the home by creating a negative pressure zone beneath the basement subslab of the home. This is accomplished by first laying down a 4-inch layer of large sized gravel where the foundation will be poured. The gravel is then covered by plastic sheeting commonly used in moisture protection.

A three- or four-inch PVC or other gas-tight pipe used for plumbing is inserted into the gravel bed, through the plastic membrane and will protrude from the poured concrete floor. The gravel allows for the radon gas to move freely and be suctioned up the venting pipe and away from the house. For positioning purposes in a new home, the radon pipe can pass through the same chase as furnace or water heater vents, with appropriated spacing. By passing through a heated area, the stacking effect will work to draw the radon gases up through the pipe and out the roof. 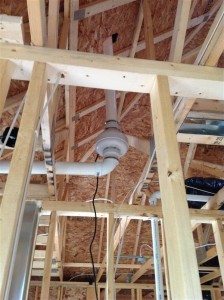 from beneath the subfloor. Many homes will only need a simple pipe stand that will act as a passive vent system. Once the structure is completed, a radon test should be conducted. If the detected radon level is above 4 pCi/L, then an inline exhaust fan will need to be installed. For this reason, it is generally a good idea to install a hard-wired electrical circuit in the attic or crawlspace of the home, should a fan need to be installed. These fans are generally quiet and do not draw a large amount of electricity.