Touchless faucets have reached new levels of sophistication and precision, making their use in the kitchen even better than before. The faucets differ among manufacturers, but many offer single hole installations, with one handle controls set to one side. A connected spray hose is completes this sleek look.

Kohler’s Sensate® touchless faucet (right top) places its single sensor on the underside of the curving faucet. It features a 15.5-inch pull down spout and a new DockNetik™ magnetic docking system to hold the spray hose in place when not in use. The 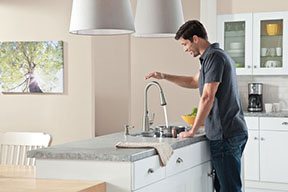 spray nozzle itself has two settings: a stream and a sweep spray function. The faucets are available in two finishes, vibrant stainless and polished chrome. The faucet is turned on or off with the wave of a hand or placement of an object, such as a cup, under the sensor. The sensor works from a precision activation window that limits false activations while working in the sink. The unit works from AC power and has an LED light to indicate when the faucet sensor is activated.

Moen’s MotionSense (left) relies on two sensors, the “motion sensor” at the top of the faucet’s curved spout and a second “ready sensor” on the base of the unit at just the level one would hold a cup or hands beneath the spout. A single motion turns the water on; another turns it off. Unlike the Kohler product, Moen offers eight different faucet designs that feature the MotionSense sensors. One we particularly like for a rustic look is the Arbor with an oil-rubbed bronze finish. 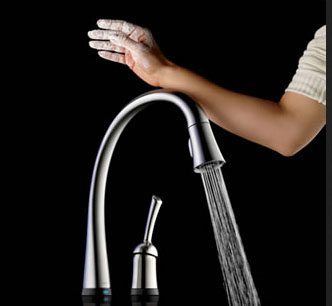 For a battery operated version of a hands-free faucet, consider a Delta ToucH2O faucet (right below). This is not a “touchless” faucet per se, but turns on or off with the touch of a hand, forearm or finger. The Delta ToucH2O faucets are available in 18 different styles and configurations and are the least expensive of the three faucets discussed here. One downside: the faucets’ sensors are battery-powered, requiring an occasional battery replacement.