Home|Blog|Uncategorized|Trusses and Purlins – Beauty and Strength 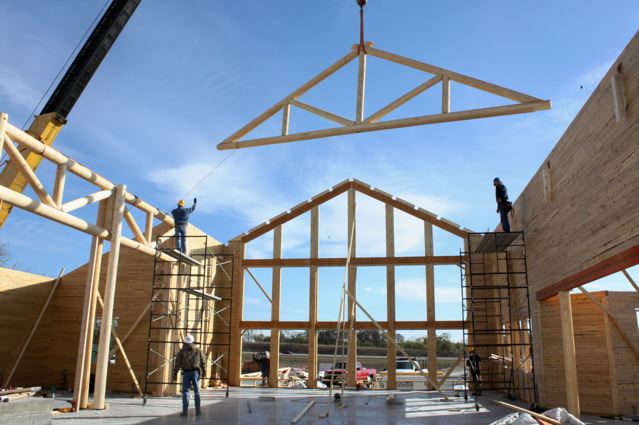 One of the pleasures of many Katahdin designs is the airy and open spaces inside the log homes. These are achieved with the full log truss and purlin roof systems for which we are known.  For many of our customers, the visual effect of these stunning components makes a Katahdin home the only one that meets their aesthetic standards.  But their beauty also provides a structural strength that is unsurpassed by conventional construction. Because the technique is relatively uncommon, we thought a primer on  how we construct trusses and purlins would be interesting.

We recently spoke with Brien Shreve, of Cabin Run Contracting, a Kathdin dealer based in Romney, West Virginia. As two of Katahdin’s most experienced truss and purlin finishers, Brien and his brother, Mike, recently spent a couple of weeks assembling the mammoth log trusses to top off the Eddie Montgomery Steakhouse in Harrodsburg, Ky. These trusses measured 38 feet long by 10 feet tall and by necessity were raised and lowered into place by a crane.  The trusses will support the roof over the 20,000 square foot restaurant and entertainment facility planned to open in 2009.

Though most Katahdin homes have truss and purlin systems on a much smaller scale than the Steakhouse, they are constructed using the same techniques. Brien gave us the lowdown on what makes Katahdin trusses and purlins special.

First, it’s important to define the architectural elements we are talking about.  A purlin is a log that supports the roof system. Unlike its cousin the rafter, which runs vertically from roof peak to eave, the log purlin runs horizontally inside the home and often emerges under the eaves on the exterior of the log home for a decorative effect. 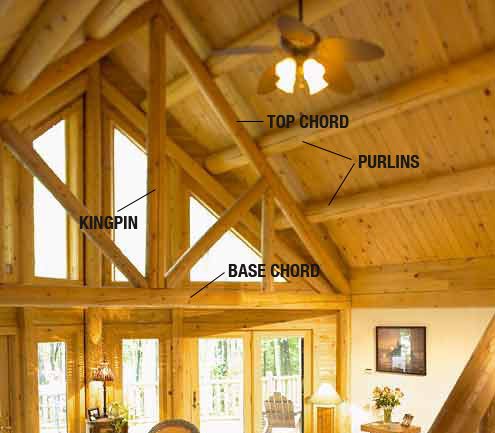 Log trusses are constructed of whole logs in an elongated triangular shape, with the outside pieces of the triangle called chords, interior supporting posts and a center post or "kingpin."  Many people are familiar with pre-manufactured trusses that are common in stick frame building and are held together by metal brackets. Trusses help to distribute the roof load out to supporting walls. Purlins are laid across the trusses in a home to provide the structure for the roof.

Log trusses in Katahdin Homes are specially constructed with strength and beauty in mind. The reinforcing steel bolts and plates are all integrated into the truss so as to strengthen but remain inconspicuous. The center post or "kingpin" is split in half down its length, routed in the center to accommodate a center steel rod. The two halves are bolted back together and a plate at either end locks the steel pin and the kingpin together into one reinforced unit.  The plate at the bottom end of the center post is bolted into the lower spanning chord and can be recessed into the wood to make it virtually invisible. Some log home manufacturers don’t take this extra step and bolt reinforcing brackets to the exterior joints of their trusses.

Purlins and trusses are cut to length (including extra footage for onsite finishing) and diameter specifications at the mill in Oakfield.  However, the final assembly and fitting occur on the building site. The builders fashion mortises and tenons at the ends of the upper and base chords. "We use chainsaws first for removing the majority of wood around the joints, then finer saws and hand tools to make a perfect, tight fit, said Shreve  The tenon is a peg-like extension off the end of the top-most chord which is fitted into a corresponding slot on the base chord that measures two inches deep by three inches wide and eight inches long. This is cabinet joinery on a large scale. The angles of the ends where the two chords are joined must be precise for maximum strength and stability; thus they are fitted by hand.

Trusses may be assembled at ground level and then lifted into place with a crane.  If a crane is not available or the 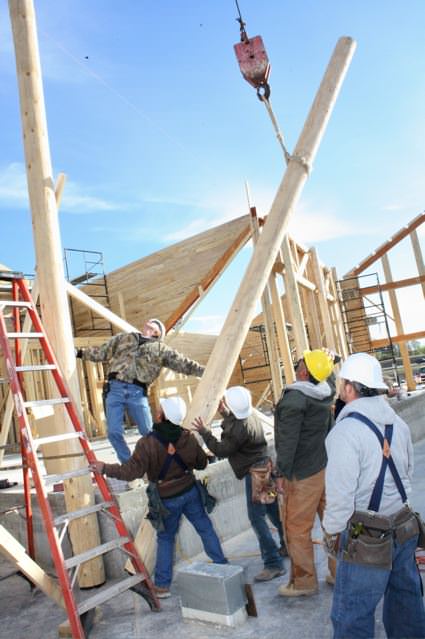 building site is not accessible, the trusses can be assembled in place on top of the log walls.

Pre-notched purlins are then prepared and laid lengthwise over the top chords of the trusses. The purlins, like the trusses, can be either round or square in shape. Then the pine boards for the roof system is laid over and attached to the purlins. The result of the truss and purlin roof system is a dramatic and soaring cathedral ceiling. This is a look that many log home owners feel completes the true log home ambiance within the home. "We have many people who when they see the full log truss and purlin system decide on the spot that that style is the only one they’ll have in their log home," said Shreve. "Out of the 45 or so homes we’ve constructed, only a handful didn’t have log trusses and purlins."

For those who have a plan design in mind with a rafter-style treatment, many plans can be converted to a truss and purlin style roof at little or no extra expense for most design conversions. According to Shreve, he’s taken many plans and switched them over once a home buyer has seen the stunning effect that the log truss and purlin system can give to the interior of a log home.