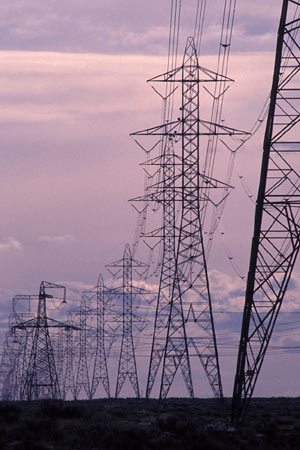 When the electricity industry was deregulated in the 1990s, as many as 24 states ultimately deregulated their electric utilities, allowing open market competition for electricity. The Federal Energy Regulatory Commission oversees the ten areas of electrical markets thoughout the continental US. This deregulation allows companies to bid and contract for off-peak electricity produced by the traditional utilities then re-sell the electricity to its customers.

This deregulation, coupled with new thermal electrical storage technology, may offer a solution for customers unable to invest in individual alternative energy units, but who still want to participate in the savings. One company in Maine, Thermal Energy Storage of Maine LLC is attempting to make the bridge between alternative energy sources, like wind, hydro, tidal and solar and electric ultilities and homeowners.  This new company hopes to enable its customers to lock into long-term, negotiated electrical contracts based on off-peak rates. We spoke with Sam Zaitlin, president of Thermal Energy Storage to find out how it works. 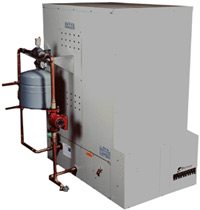 Right now the majority of electricity in Maine is generated with natural gas. When compared to the volatility of fuel oil pricing, natural gas is a relatively stable, domestic energy source. What Thermal Energy Storage is hoping to create is the option for Maine residents to lock in a rate for electrical service based on off-peak rates. The customer can then convert that electricity into heat using Electric Thermal Storage technology.

Presently, according to Zaitlin, his company is negotiating a five-year contract price of 7 cents per kilowatt, that would amount to an equivalent fuel oil price of $2.20 per gallon.  Maine is one of 24 states with deregulated electricity and many of these states offer electricity options from private companies that make ETS a viable alternative. Several websites offer information on electrical companies including Save On Energy  and Save on Green Energy.

What is Electric Thermal Storage?
A North Dakota based company, Steffes Corporation, is one manufacturer of Electric Thermal Storage units for residential use. This technology uses specially manufactured, dense ceramic blocks to store heat in the home for continuous use over peak electric hours. These units can be installed as a single room unit, about the size of a kerosene heating unit, or as a furnace unit connected to either forced warm air or hydronic system. The units are quiet, odorless and take up about the same space as a traditional furnace. Special insulation keeps the skin of the units a tolerable 180 degrees, while storing enough heat inside to release it at an even, comfortable rate throughout the day. Zaitlin said that a room unit can be installed for about $3000, with a furnace unit costing about $1,000 more than a conventional unit. 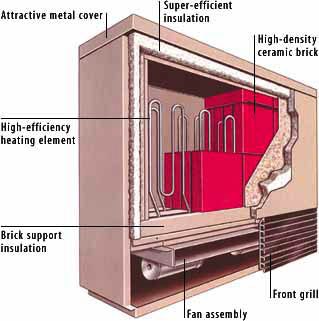 What is interesting about the ETS process is the way that electric energy may return as the primary choice for heating as more renewable energy sources come online. With Maine’s and many other state’s investments in commercial windfarms, biofuel and hydroelectric electricity generating potential, homeowners may see a return to electric heat as a viable, green alternative to fossil fuels.