Demand control pumps or on-demand pumps are an efficient way to get hot water at specific locations in a home, without the running time needed to get the warm water from its source to the faucet. Just think of how many times each day the hot tap is turned on and run until it gets hot enough and the tally will really start to add up.

Demand control pumps are not inexpensive, but if you’re in an area where water is scarce and strictly controlled, they can make a big difference in improving your water use.

How does it work?
Demand control pumps are installed near hot water fixtures, like sinks, showers or washing machines. When a sensor is activated through a remote control device, the pump 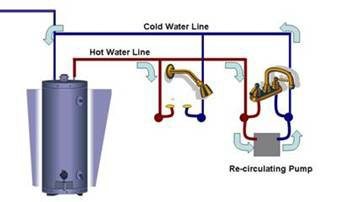 Energy savings can be gained three different ways: the warmer water in the circulation loop decreases the amount of energy required to keep the water tank at the desired temperature. Secondly, hot water that is pumped through the system at a higher rate via the demand control pumps loses significantly less heat through the walls of the carrying pipes. The on-demand pump also moves the hot water at a higher flow rate so that hot water reaches the fixture faster, and less hot water is needed to prime the loop. Additionally, if you draw from a water well, the well pump will run less often because the system is using less water and save on electricity to operate the pump.

How does it all add up?
The savings can be quite significant. In an Oak Ridge National Laboratory (ORNL) study of retrofitted homes, one on-demand control pump installed near either the master bath or kitchen sink, saved as much as 8 gallons of water daily or approximately 3,000 gallons of water annually. Annual energy savings were calculated to as much as 400 kilowatt hours (kWh).

When the ORNL increased the number of hot water points to four in a household, the figures became even more dramatic: as much as 32 gallons per day or up to 12,000 gallons annually, with as much as 1,600 kWh of energy saved annually.

To maximize the savings in a new home system, it is recommended to design the circulation loop to be as short as possible, and so a centralized water heating system relative to hot water fixtures is advisable. Adding insulation to the circulation loop pipes can also ensure less loss of heat and more energy savings over time.