Wouldn’t it be great to be able to swipe your hand across a laser beam dot and activate a touchscreen on your kitchen countertop? You may be able to do just that in a few months. Atlas Granite, a Canadian company based in Edmonton, Alberta, has developed an elegant solution to having the web at your fingertips. And the best part is the system called MASST (short for Makes Any Solid Surface a Touchscreen) isn’t tied to a particular operating system— it works from your home wi-fi connection.

Origin of an Idea 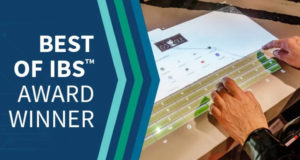 Ricky Nayar has a lot of drive. He’s grown his countertop business, Atlas Granite, to great success through lots of determination and ambition. Starting just nine years ago, Atlas has quickly become a leader in providing stone workspaces in the region working from their 41,000-square-foot manufacturing facility. When his wife, Preeti, complained about not being able to follow her cooking shows on the television and cook at the same time, they wondered why they couldn’t bring touchscreen capability to their countertop. Ricky took that idea to a technical engineer and developed a prototype. Less than a year later, his smart counter idea won “Best in Show” at the International Builders Show in Las Vegas.

How Does MASST Work?
MASST is a combination of new proprietary technology essentially making any solid surface into a touchscreen smart counter that allows you the convenience of surfing any web browser.

The MASST system technology operates from your home wi-fi signal, so there’s no need to complicate the interface with Mac, Google, or Windows. Just enter your wi-fi system username and password and it’s good to go. The MASST system’s simplicity and minimal hardware helped to vault it to its award-winning fame in Canada and the U.S.

Nayar and his company are creating new products as we write. We’ll keep you posted on any new innovations on the horizon from Atlas Granite.